Me either, but that’s what happened with Faleena Hopkins. Only it wasn’t Santa it was the trademark office, and that (toy) word she received belonged to all of us (or none of us).

I know I have been very vocal on Facebook, Twitter, and anywhere else that would listen to this disaster in the making, but I didn’t put it here. That’s because I didn’t want to taint my awesome webpage with anything like this.

But its too late for that now, the time has come to share with you my thoughts on the matter as well as explain them. 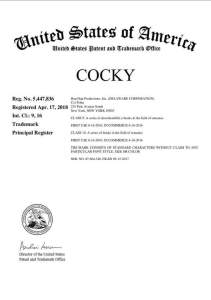 On April 17th, the trademark office approved Faleena Hopkins application giving her the right to own the word “Cocky” in a series of romance novels – this sounds like it wouldn’t affect you, but wait.

Due to the confusion clause that follows this means there can be nothing published in any genre with the title cocky or any spelling of. Due to the fact that she flip flops her genre’s in Amazon makes her a best seller because they were not in a romance category. See her latest book below:

The confusion clause doesn’t allow for anything to be confused with her book. While, it only should cover romance books hers aren’t even listed as romance so therefore she believes she has an open platform to threaten people with legal battles, if they don’t comply by doing what she wants.

Anyway, I get wind of it from some authors who had heard the threats and were terrified to say anything for fear of a public or legal backlash.

Me – on the other hand didn’t care. I do not back down to bullies even those who manipulate the law their way.

I posted what’s in the pink box stating I’m not scared of her and honestly I’m not. Not physically, not mentally, not emotionally, and not legally. So, she messaged me on there as you can see. Then came my reply:

See that little circle at the bottom. It shows me she read it… She went back and marked it unread and ignored me.

More information came to light. She claimed that her cover models were shot by her, but they came from Shutterstock and the inside of her books confirm this.  She also trademarked a font that allegedly does not belong to her because it was already trademarked (Shame on the Trademarking office, you gave a delusional woman power).

But everyone set out to right this wrong, so they contacted the actual owner of the font and he was really nice.

So then I penned her another message: 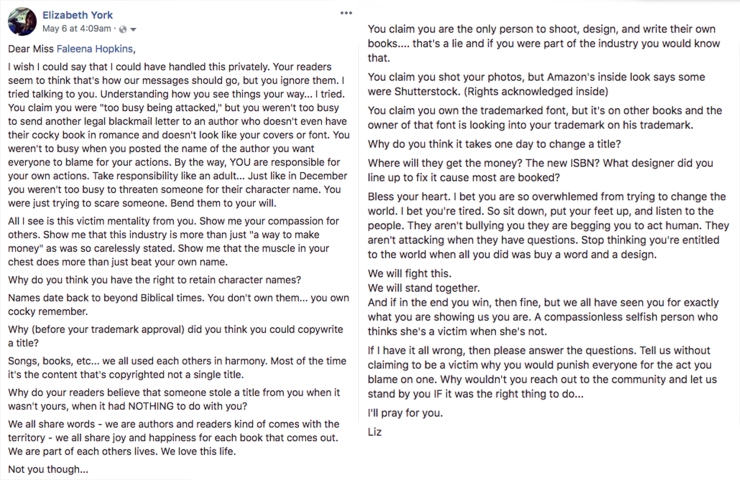 Then we offered to let her come on a pod cast with Author Marisa Oldham and Author Angie Martin and I discussed what was happening with guests (and where you will hear more details that I am skipping over because I want this post to end this year).

The podcast can be found here or you can listen below (starts on an ad then goes into it. I am about 15 min in).

During this time it comes to my attention that her book once titled Cocky Soldier, was actually about a marine. She didn’t know the difference and apparently Google didn’t share that info.

Around this time her readers stepped forward about page stuffing.

Page Stuffing is when an author writes a book and it ends half way through the book and the remaining pages are simply promos, first chapters, other books, etc. She has 17 book promos and a bonus scene that helped her fly under the radar and get paid more money from Amazon that should have went to other authors in Kindle Unlimited.

As things calmed over a weekend (or so I thought) I went to church with my (autistic <- that’s important to know later on) son one Sunday morning. I had a blast. No drama. No one trying to take ownership of words. Just me, my kids, my mom and stepdad, and God. It was magical – until I came back to town. The first thing I always do when I get home is check all messages. I had been in constant contact with a group of authors all day, but I still had to check my fifty million emails that are usually spam.

I loaded facebook and in my face was her calling out another author. Someone I didn’t know personally, but someone I had respect for. That’s when it happened.

That’s when the cheese slid off my cracker.

I made several points in the video that she later addressed in a video that should have been handled by a publicist.

One being the name of her book.

In the screenshot of the kindle above she claims it was too much work to retitle, but then she emails all the “cocky” authors with demands to do the exact same thing that is too hard. Retitling the book sounds easy, but its not.

First you have to schedule with your designer, pay for it (designs run from $50 – $500), and then if the background doesn’t fit the title you have to pay for it. (Stock start at $1 – Exclusive – $1000). Then you have to be able to market it with ads, swag, banners, etc. The paperbacks that you paid for to take to a signing are now garbage as you have to get all new ones made. Retitling is not cheap and not easy.

After my video, she finally changes her own: 458 days later; not the one day she was giving all the other authors.

Rumor mill through Google lists Faleena as being rich, ($17 million) rich enough to fund her own books into movies, to live in NYC in an apartment that is bigger than a mouse trap, and enough to be getting between $10K – $100K in All star bonuses from Kindle that shouldn’t have been hers with the page stuffing.

Other authors are losing money, and not even getting a warning. Instead it was a notification. Thankfully the RWA stepped in and until this matter is handled Amazon will leave everyone alone. 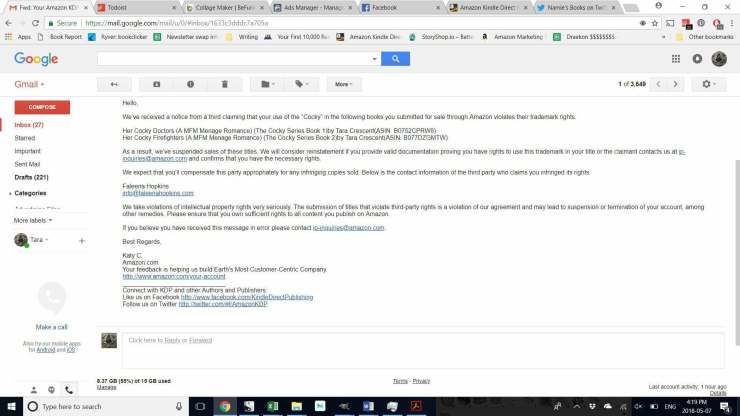 Let’s take a moment to talk about the books. The ones that Faleena claims people are copying from her… Have you seen this?

Looks similar right? The one on the left came first, so who copied who?

Then let’s talk about how “cocky” came to be:

Originally she used the name Sabrina Lacey to write and publish these books, but they must not have been doing what she wanted because she filed for the trademark in 2016 changed their name… but they weren’t listed as “cocky” until 2018 – one week before that trademark that she claimed took seven months was approved.

Feel like I am jumping around yet? I am. I am listing the information as it came out. Feels like a whirlwind, right?

Imagine being an author, spending months coming up with the most creative thing you can, writing day after day for months, and then you send it off to edits. You’re happy right now, you will be ecstatic until your editor makes those pages bleed. Going through edits is like going through hell with a heater sometimes, but you make it through without grabbing a bottle of scotch.

You’re happy again because now the book is better and it feels complete. You buy a ISBN, you buy a cover (or if you’re like me you make payments on those $900 photos forever), and you schedule with a designer who fits you in on their schedule not yours. Then you start to market it. You put all your money, work, and pride into this. It’s your book baby.

Now, a year goes by and you write a few more book babies when you get an email that says all that work means nothing to another person because they bought a word. That creative title and how it fits into the story is now awash as you research synonyms that pale in comparison to the one you had, but at least if you surrender and find the money to change it you are safe from being sued.

Do you think your happy?

Do you have a couple hundred minimum sitting in the bank to make insta-changes like this?

I know I don’t. I’ve written ten books now and make under $100 a month, so had I had a Cocky book I would have been screwed, but Faleena doesn’t care.

She also has no understanding of the law or how it works. She posted this on another authors Goodreads – with a one star review – the same thing she is claiming we did. Here is the deal, we can trademark brands, and in Cocky that is what she claims the brand to be. However, we CANNOT copyright titles. She lied to this author, gave her a bad review, publicly harassed her, and all because she didn’t google how copyrights work.

Truth be told, this isn’t even half the story, but I’m tired of talking about her. I am tired of her being the focus. I am wishing someone would give her a bible and explain the Golden Rule to her. I hope one day she realizes that she could have been in our family, but instead she’s the aunt we will never speak to again except to warn people that she bites.

I am going to bed now… perhaps I will finish this tomorrow, or maybe not. Seems there are more fights to fight and I am all out of gummy worms.

1 thought on “#CockyGate in my words”

This site uses Akismet to reduce spam. Learn how your comment data is processed.